The Kitchen Phone Returns, With Superpowers

As the transition from land lines to cellular phones continues, the kitchen phone is gradually disappearing, with no obvious replacements. Cellphones have a 1:1 relationship with individuals now, so it follows that you don’t call specific locations by cell anymore, it’s always to a person. 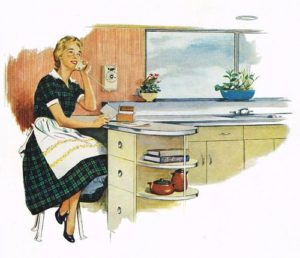 As it was in the 1950’s, this is an opportunity to once again envision kitchens (which seem antiseptic and quiet these days) as a calling destination. We have to be able to call a place instead a body, without resorting to obsolete and fading landline service. Make them family message centers again.

Over the decades, communications has evolved from simple voice calls to multimedia messaging , to the point where video calling is supported via one app or another. Phablet phones such as the Samsung S3 9.7″ tablets take calls directly of course, but so too can the ubiquitous Apple iPad, with or without a carrier chip installed, depending on the originating app. Soon VOIP voice will be a default function on all tablets.

As a network designer, in 2011 I was working on an enclosure for defibrillator electronics when I realized that the new iPad might have applications as a fixed cellular device, if only because it incorporated all the circuitry required for sending and receiving data, and it had a superb video display as well.

Consumer electronics have not seen great success as kitchen appliances, for many reasons. They typically demand major counter space, have ugly, even dangerous  power cords that snake and pile up across those same counters, and devices cannot be wall-mounted easily because countertop backsplashes are usually impervious, expensive, and intolerant of custom wiring schemes and hole cutting.

I investigated utilizing double-sided tape as a mounting option, but over time it either sagged or lost its grip from greasy areas, or conversely – required that the instrument literally be torn off the wall to remove it – with unprofessional consequences, particularly with drywall.

I expect that Sony must have considered these factors 50 years ago and demurred, so I looked for other possible options. 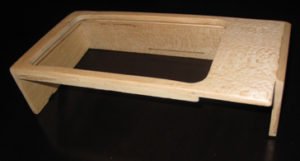 My gaze fell onto the electrical outlets above the kitchen counter, particularly the one closest to the stove. This could become home plate in the smart network game, if the planned device was plugged in here, the screen would always be in view during cooking activities, and responsive to voice interaction at phone call volumes.

Next, if my instrument surrounded the outlet – whoa! – this was the epiphany (designers need to claim these). It would hide the whole works – the outlet, the cables, any switch. No counter space taken, easy to clean, just 5V/10W for power and ideal for solar in developing countries. Works with WiFi and OS updates, always fully charged. OK!

I would surround the outlet, but this meant that I would have to leave its back face almost completely open, wide enough to accommodate 3 ganged wall switches, in these images so it could hover above the garburator and light switch. It would have to hang flush against the wall, with an open bottom that would allow cords in to access the second plug not in use, and for ventilation. I left a little aperture on top of the enclosure so that cell phones or ear buds could be charged on top of the tidy, secure platform it would provide. 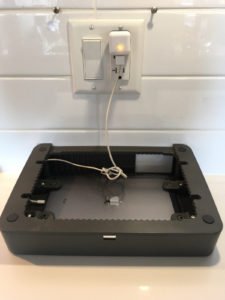 Here was my basic design, yet I realized that absent a sky hook, the enclosure had to hang on something. Noting the widespread use of ceramic tile for kitchen splashes, I regarded them as the greatest challenge, and decided that one, or at most two narrow holes could be drilled within the tile grout, with no lasting damage. If presented with stainless steel splashes – one small drill hole would have to be tolerated -I don’t do rubber suction cups. But I did place rubber bumpers in each corner to stabilize it rotation-wise, and to be furniture friendly when used on a flat surface.,

I set to work on prototypes, and designed a narrow back bezel with serrated edges on its four inside borders. These indentations would settle onto the hanging screw(s), and allow four orientations over drywall etc. for other rooms or workplaces.

Some trial production in aluminum proved to be too costly, so it was a matter of evolving a two-panel, plastic injection design to accommodate four padded clamps, a sliding control access door, and the rubber footings. The whole instrument could be assembled and installed in minutes, and proved to be rigid, protective and wholly portable.

I called the design a Poort to sound vaguely Scandinavian, and to leverage the Dutch word that means “gate”. The production runs are sized to fit the millions of 9.7” iPads (only) in circulation, of any generation. 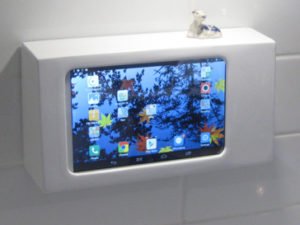 Other sizes beckon, particularly the Samsung 9.7” S2 and S3 models, but the fit is not exact as yet. The Samsungs are actual ringing cellphones and Poort does plan to support them shortly, to be our flagship model in the Android world. A new set of injection molds is in process.

THE RETURN TO SMART KITCHENS

Television also made some inroads into kitchens, as electronics downsized their dimensions, but they never could resolve taking up so much counter space, the need for an antenna or jack, and still face the issue of destructive mounting over décor backsplashes. Under-cabinet installations have been ad hoc and costly.

But now the time has nontheless come for kitchen TV, as convergence with the Net continues. Any TV now being designed has to be a smart TV. Broadband Internet has expanded, especially for wireless, and streaming video has become economical and practical. We have watched Netflix completely displace Blockbuster VHS for home movie consumers. Now we are witnessing the migration of such perennial TV stalwarts as NFL football to streaming; joining YouTube and others as they exploit video on mobile devices. Carriers are battling to redefine the word “unlimited” for data (as only they can)  over wireless 4G and 5G, to meet the requirement and growing demand for mobile video.

While television is not about to disappear entirely, lessons must be learned from the arrival of voice assistants and smart home networks. This new architecture depicts a move to interactive voice computing and also toward high-bandwidth fixed form factors and applications.

The desktop computers that began this revolution have never stepped down and remain in the home. Now, adding smart speakers around the house, with related appliances like smart light bulbs, thermostats, security cameras etc. points to blatant marketing functions being integrated, and none more so than with voice assistants and smart speakers, insulated from Web intrusions.

These devices are thinly disguised Trojans for the tech giants’ ecosystems being assembled by Amazon, Google, Apple, Samsung etc. They act as little more than carnival barkers trying to convince you to come inside and buy a song. And they’re doing a good business. Why? Because the age of voice control of computing is upon us. You might not believe it until you see it, try it out by degrees, then take it for granted like Google maps. You just use it.

And so the smarthome party gets underway and the installed base builds, but the smartest devices in all the land, all 300 million of them, have not been invited – the iPads. Will they bring a poison Apple? Do the tech giants hate them because they’re beautiful? That’s not it.

It’s because the Web is independent and that open gate threatens to let the dogs out. Let’s consider why having a Poort iPad hub in your kitchen might ruin the smarthome party briefly, yet completes things once everyone settles down. 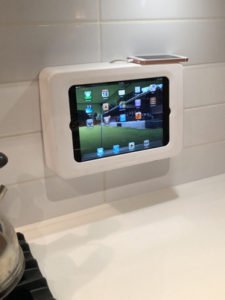 The iPad’s legacy legions, now perched over everyone’s kitchen counter, will begin by enslaving smart speakers as their own. There was reluctance on the part of Google and friends to keep Bluetooth connectivity out of smart speakers, but the howls got louder and the speaker buyers became suspicious. You don’t sell speakers these days without BT or at least AirPlay 2 as Sonos does, or you’re up to something.

So the iPads will connect with those speakers. Here are sample BT instructions , and I expect that many an iTune already pours through them. The IPads have modest sound by themselves, but now they’re rockin’ to the EchoPlus and GoogleMax’s lovely bass response. Ooh, the effrontery!

Meanwhile, people learning to prepare home cooked meals again are bouncing along in front of their stoves, watching Netflix or YouTube and running a constant banter with Siri, who is right there listening (she’s on power all the time) at point blank range. All the assistant you need, and a HomePod mate in the oven. This much fun will help people forget fast food, start kitchen parties, learn kitchen step dancing. The iPad hub beeps, a screen window opens and Mom keeps an eye as her kids, cellphones in hand, walking home from school.

The kitchen phone is back, and enables childcare!

The iPad offers a a DualHub™ option to complete smart networks with its independent Web and movie streaming and a file system. A DualHub acts as a rare, remote access point for Apple’s HomeKit network and its supported devices. As Yogi Berra counselled us “When you come to a fork in the road – take it.” The DualHub offers us an alternate highway outside the walled garden ecosystems that voice assistants enforce.

At any time, a single BT command returns control to Alexa, and the Amazon or Google ecosystem comes back into play, running on Amazon device hubs. When Apple’s announced HomePod speaker is released in 2018, Apple devotees will be able to claim a best-of-breed partnership that will likely be unmatched for some time, and may form the root network in millions of homes, owing to the huge installed base of waiting legacy iPads.

Early adopters can cobble a DualHub $200 network today, with a $100 iPad Air off Craigslist, any Bluetooth speaker/headset/ear pods and a $50 Poort kit from Amazon. Not complicated at all – let’s just go for it and let the programmers sort it out.

Keep your eyes on your fries, this will be fun! – Dwight

Dwight Jones is the CEO and Designer for Poort Technologies   dwight@poortals.com @poortals @humanism