Poort Technologies has released an 9.7″ iPad enclosure that promises to marry Apple’s forthcoming HomePod smart speaker with hundreds of millions of legacy iPads, a tandem sure to cause concern among home automation competitors. A Poort enclosure mounts an iPad above a counter top, addressable by HomePod speakers within range. An iPad Pro will also be able to accept hand-offs from the HomePod over AirPlay2. 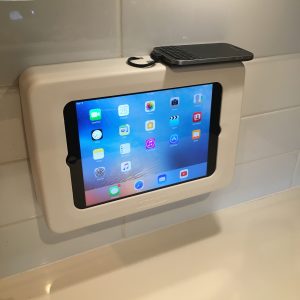 At its manufacturing release this fall, Poort CEO Dwight Jones asked in a press conference if an iPad Poort partnered with the HomePod didn’t form a more congruent partnership than any of the growing number of smart home contenders.

“Both the Amazon and Google speaker families are designed to monetize their respective ecosystems, as much as automate the home.” he stated. “I certainly welcome the HomePod as a power partner for the millions of legacy iPads – ignored so far in the smart home industry. They will form a best-of-breed team – whether for broad versatility, their app portfolio or great audio engineering. It’s time for the smart home conveners to invite iPads to the wedding – the Lost Legion of home automation is coming to the party.”

Jones also added: “Consider an older iPad Air mounted with a $50 Poort kit over your kitchen counter. Just say “Hey Siri, open YouTube, chicken recipes” and there they are – with video instructions for each dish. What can Google Home offer you – a voice synopsis? The same can be said of the limited functions of the Echo Show – to a designer these approaches are atavistic and contrived. Poorts do not claim counter space, do hide the cables, are always charged and pack an unbeatable app punch with that iPad aboard. They’re even fully portable. A HomePod complemented by an iPad for video hand-offs – like a baseball battery – will establish the dominant backbone network that kitchen automation has sought for decades.”

The new 9.7″ Poorts were announced at the recent BC Tech Summit in Vancouver and are distributed via Amazon.