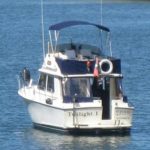 For Poort design work, I reinvent my own 34′ trawler Twilight as a “research vessel” to investigate Poorts in marine electronics, embracing the iPad as an emerging MFD ‘standard’ – work with me on this… On Twilight the idea is to have the iPad secured near the diesel’s instrument panel, and hopefully remain portable up to the bridge, if practical.

In these pics we see that the Poort can be connected to the 12v USB charger that replaced the cigarette lighter (don’t fret, everybody vapes these days, I’m told. Moi?). The cigarette lighter was swapped out for the dual USB charger in 5 minutes flat – has the same hole diameter. These chargers only pump one amp per plug but that’s enough to keep a Poort 100% charged, always. Notice how the Poort works well as a flat, portable controller, with the screen inclined toward you. Cute little rubber pads in the corners for traction and rattles – Poorts are decent sound boxes. It’s good for the duration of a daily boating trip if you toggle the screen on/off between sessions. Very welcome for setting up in the galley later too, while you cook coq au vin in your Dickenson oven on cool evenings. 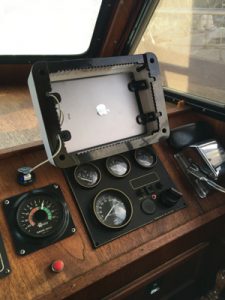 This image shows the huge cavity available inside a Poort; so useful for hiding ugly outlets and cables over kitchen counters. What can it do for us here? 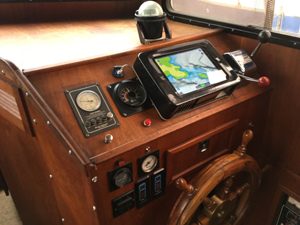 Here’s a black Poort to better match the dash panel. This was a glossy prototype, the production one on Amazon is a textured charcoal grey. Note that when you acquire two Poorts, you can reverse the color of the back plate, to either white or stone grey.

By good fortune, when placed over my Volvo dash console, the Poort surrounds it perfectly. Sometimes even a blond squirrel finds a nut! It indeed sits down securely in all seas, and the boat operator can lift it and peek at the gauges any time. Soon the gauges too, may be displayable via another iPad tab, joining Navionics, the weather and radar etc..

It’s sneaky-pleasant to steer and surf the Web at the same time – no need to Shanghai a guest for indentured vigilance, until after you’ve first checked the ball scores, Facebook, got caught up on Forum posts, and researched the Red Wings for some answers. Having a web page open is a kind of mental co-pilot, to enrich those sometimes boring cruises. A great chance to use Bluetooth ear buds for noise cancellation overlaid with iTunes.

The Bridge too Far? Feeling like the cat that caught the bird, I decided to confront the modest bridge station atop Twilight, to push my luck and see what that big open casing might offer me up top. 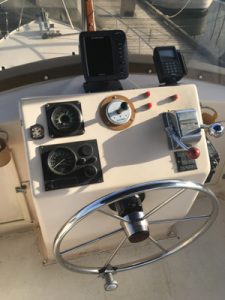 Hmmm… No free lunch up here – the Volvo bridge panel is a now a mere substation with no clearance along its top edge for settling the Poort into. It won’t fit above the upper gauge either. No opportunities elsewhere on this spare dash – except – wait a minute!

Maybe it will hang on the Furuno sounder? 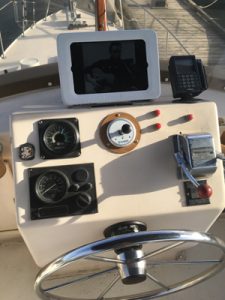 Yes!!  Seems a blond squirrel can find both nuts. The Poort looks like it was born to command!! Lard Jaysus! as Newfie Bill would declare.

I congratulated myself for how the Poort stood clear as if by design, fully secure ‘protecting’ this opportune mount. I deftly lifted the 2 lb. Poort off with one hand, read the depth (14.6 ft – doesn’t change much at the dock…) and set it back over the lit up Furuno.

I’m going to have to get used to starting the boat and the Web at the same time. From here on in, Navionics and Furuno will have to compete for my attentions, no longer so freely given to old black displays insensitive to my many side interests and eclectic needs.

Dwight Jones is the Designer and CEO at Poort Technologies.